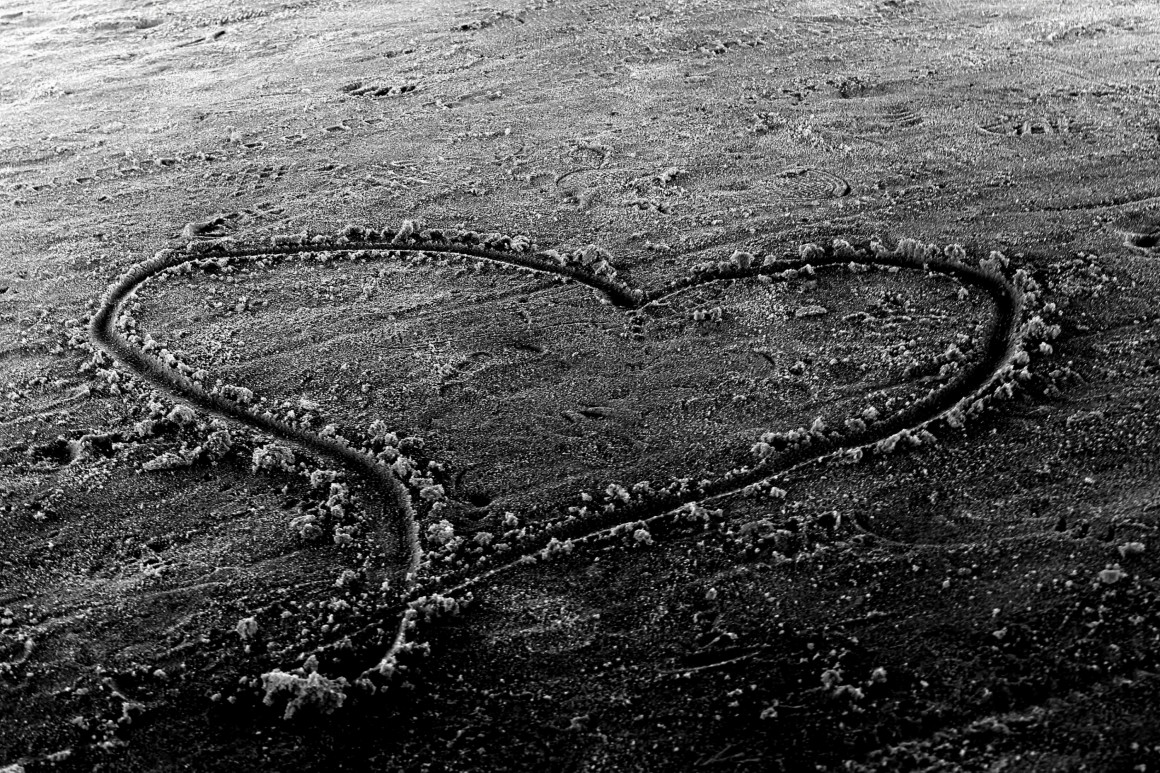 This is the LOVE STORY between Zainab bint Muhammad and Abu El’Ass ibn Rabee'; Zainab was the daughter of the Prophet ﷺ  and her cousin Abu El’Ass, was Khadeeja’s nephew. He was one of the nobles of the Quraish, and the Prophet ﷺ  loved him very much.

One day Abu El’Ass went to the Prophet ﷺ  before he had received his mission of Prophethood and said: “I want to marry your eldest daughter”. So the Prophet replied: “I must ask her first”. He ﷺ  went to Zainab and asked her: “Your cousin came to me and he wishes to marry you, do you accept him as your husband?” Her face turned red with bashfulness and she smiled. So Zainab married Abu El’Ass, the beginning of a great love story. They had two children; Ali and Omama.

Then Muhammad ﷺ  became a Prophet while Abu El’Ass was away from Makkah. Abu El’Ass returned to find his wife a Muslim. When he first came back, his wife said “I have great news for you”. He stood up and left her. Zainab was surprised and followed him as she said, “My father became a Prophet and I have become a Muslim”. He replied, “Why didn’t you tell me first?” Hence a big problem began between the two; a problem of religion and belief. She told him, “I wasn’t going to disbelieve in my father and his message, he is not a liar, and he is “The Honest and Trustworthy”. I’m not the only believer; my mother and my sisters became Muslims, my cousin Ali ibn Abi Taleb became a Muslim, your cousin Othman ibn Affan became a Muslim, and your friend, Abu Bakr, became a Muslim”. He replied, “Well, as for me, I don’t want people to say, ‘he let down his people and his forefathers to please his wife’. And I am not accusing your father of anything”. Then he said, “So will you excuse me and understand?” She replied, “Who will excuse and understand you if I don’t? I will stay beside you and help you until you reach the truth.” And she kept her word for 20 years.

Abu El’Ass remained an unbeliever, and then came the migration. Zainab went to her father and asked him for the permission to stay with her husband. The Prophet (SAW) replied, “Stay with your husband and children”. So Zainab stayed in Makkah, until the battle of Badr occurred. Abu El’Ass was to fight in the army of Quraish against the Muslims. For Zainab, it meant that her husband will be fighting her father, a time Zainab had always feared. She kept crying out: “O Allah, I fear one day the sun may rise and my children become orphans or I lose my father”.

So the battle started, and ended in victory for the Muslims. Abu El’Ass was captured by the Muslims, and news of this reached Makkah. Zainab asked, “What did my father do?” They told her, “The Muslims won”. So she prayed to Allah, thanking Him. Then she asked: “What did my husband do?” They said: “He was captured”. She said, “I’ll send a payment to release him”. She didn’t own anything of much value, so she took off her mother’s necklace, and sent it with Abu El’Ass’s brother to the Prophet. While the Prophet ﷺ  was sitting, taking payments and releasing captives, he saw Khadeeja’s necklace. He held it up and asked: “Whose payment is this?” They said: “Abu El’Ass ibn Rabee”. He cried and said “This is Khadeeja’s necklace”. As soon as the Messenger of Allah ﷺ  saw that necklace, he had a feeling of extreme compassion and his heart palpitated for the great memory. The Companions who were present there gazed in amazement having being captivated by the magnificence of the situation. After a long silence, the Messenger of Allah ﷺ  stood up and said “People, this man is my in-law, should I release him? And do you accept the return of this necklace to my daughter?” They answered in unison “Yes, Messenger of Allah”. The Prophet ﷺ  gave the necklace to Abu El’Ass and said to him: “Tell Zainab not to give away Khadeeja’s necklace”. Then he ﷺ  said, “Abu El’Ass, Can we speak privately?” He took him aside and said, “Allah has ordered me to separate between a Muslim and a disbeliever, so could you return my daughter to me?” Abu El’Ass reluctantly agreed. Zainab stood on the gates of Makkah waiting for the arrival of Abu El’Ass. When he finally came he said, “I am going away”. She asked, “Where to?” He replied, “It is not me who is going, it is you. You are going to your father. We must separate because you are a Muslim”. She implored him, “Will you become a Muslim and come with me?” But he refused. So Zainab took her son and daughter and traveled to Madinah, and for 6 years she refused to remarry, hoping that one day Abu El’Ass would come.

After 6 years, Abu El’Ass was traveling in a caravan from Makkah to Syria. During the journey, he was intercepted by some of the Prophet’s companions. He escaped and asked for Zainab’s home. He knocked on her door shortly before the dawn prayer. She opened the door and asked him “Did you become a Muslim?” He whispered “No, I come as a fugitive”. She implored him once more “Can you become a Muslim?” Again his answer was a negative. “Do not worry.” She said, “Welcome my cousin, welcome, the father of Ali and Omama”. After the Prophet ﷺ  prayed the dawn prayer in congregation with the people, they heard a voice from the back of the mosque, “I have freed Abu El’Ass ibn Rabee”. Zainab had granted Abu El’Ass’ freedom. The Prophet (SAW)asked, “Have you heard what I heard?” They all said, “Yes, Messenger of Allah”. Zainab said, “He is my cousin and the father of my children and I have freed him”. The Prophet ﷺ  stood up and said, “O people, I declare that this man was a very good son-in-law, he never broke his promise, and neither did he tell lies. So if you accept, I will return his money back and let him go. If you refuse it’s your decision and I will not blame you for it.” The companions agreed, “We will give him his money”. So the Prophet ﷺ  said to Zainab, “We have freed the one you have freed, O Zainab.” Then he ﷺ  went to her and told her “be generous to him, he is your cousin and the father of your children, but don’t let him get near you, he is prohibited for you.” She replied, “Sure, father, I’ll do as you say”. She went in and told her husband, “O Abu El’Ass, didn’t you miss us at all? Won’t you become a Muslim and stay with us?” But he refused.

Abu El’Ass then took the money and returned to Makkah. Once he returned he stood up and announced, “O people, here is your money. Is there anything left?” They replied, “No, Abu El’Ass, there is nothing left, thanks a lot.” So Abu El’Ass said, “I testify that there is no god but Allah, and Muhammed is His Messenger.” Then he went back to Madinah and ran to the Prophet ﷺ  as he said, “Dear Prophet, you freed me yesterday, and today I say that I testify there is no god but Allah and you are His Messenger.” He asked the Prophet ﷺ , “Will you give me the permission to go back to Zainab?” The Prophet ﷺ  smiled and said, “Come with me”; he took him to Zainab’s house and knocked on her door. The Prophet ﷺ  said, “O Zainab, your cousin came to me and asked if he can return to you”. Just like 20 years before, her face turned red with bashfulness and she smiled. The sad thing was, a year after this incident, Zainab died.

Abu El’Ass shed hot tears because of her death and drove those who were around him to tears. The Messenger of Allah ﷺ  came with eyes full of tears and a heart full of sorrow. Zainab’s death reminded him of the death of his wife, Khadeejah. He told the women, who gathered around Zainab’s corpse, “Wash her three times and use camphor in the third wash.” He performed funeral prayers on her and followed her final resting place. Abu El’Ass returned to his children, Ali and Omama. Kissing them and wetting them with his tears, he remembered the face of his departed darling.

May Allah be pleased with Zainab, the Prophet’s daughter! May He reward her with Paradise for her patience, endurance and struggle! Abu El’Ass would cry so profusely that the people saw the Prophetﷺ himself weeping and calming him down. Abu El’Ass would say, “By Allah, I can’t stand life anymore without Zainab”. He died one year after Zainab’s death.