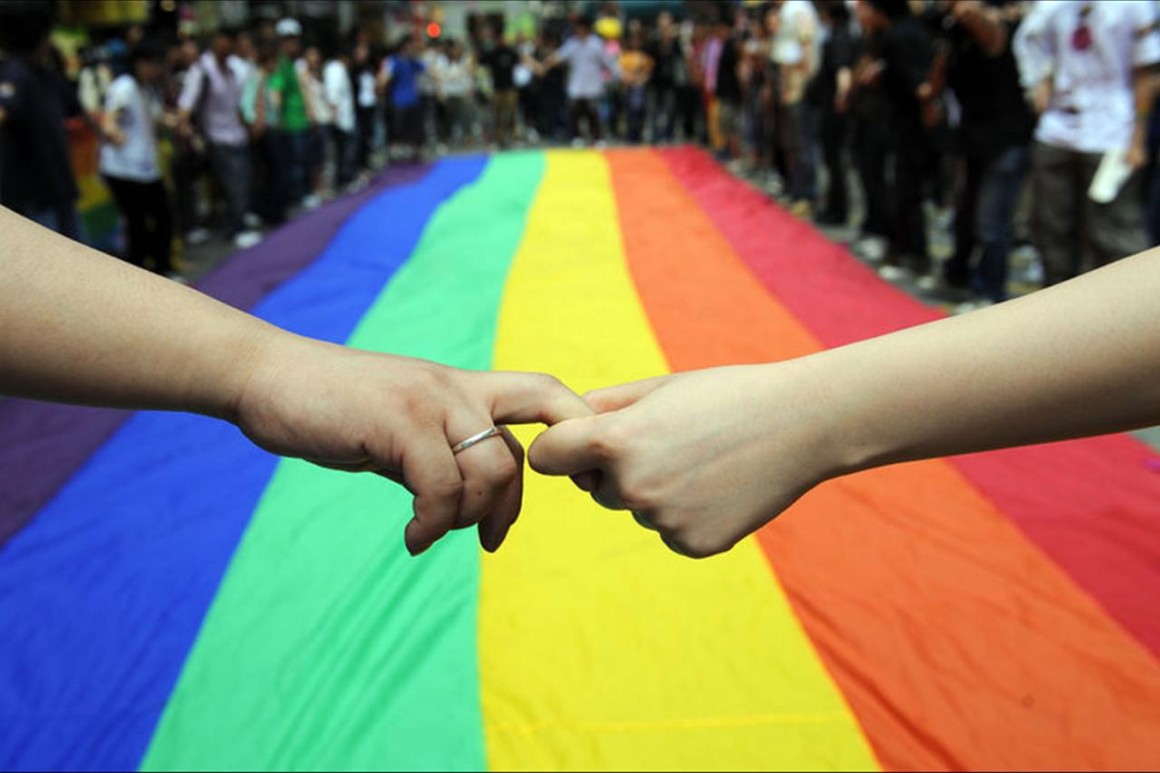 Remember the time when the word ‘gay’ meant ‘happy’?

I grew up in a generation who couldn’t even say the word out loud. We whispered it and giggled instead, even though calling a man ‘gay’ two decades ago was just a metaphor implying he was ‘girly’. Period. At that time, men were men and women were women. Any ‘homosexual’ insinuations were flat right offending, even if they were true.

But that was back then. Now times have changed. I’m openly writing an article about homosexuality, same gender marriages are legal in the States and apparently some men are ‘gay and proud’. (I’m not laughing! I just remembered a funny joke). See? I’m even scared to admit I find the radical change in our society ludicrous coz I want to avoid the hail of attacks calling me ‘narrow-minded’, ‘bigoted’. ‘homophobic’, ‘ignorant’ and accusing me of condoning ‘hate crimes’.  Tell me something, how do you stick to your morals and beliefs without offending those who don’t share them? How do you point out the wrong without coming off as a prude old-fashioned geek?

Should I put religious teachings aside? Sure! What else? Put my feelings aside? No problem! I agree! Coz people are different. Most of us are egoistic and will defend our personal views till death do us apart! So how about some logic and hard core facts instead? Which means you’ll need to put your anger, name-calling, ‘let-me-distract-you-with-insults’ tactics on the side too! Deal?

Alright, bring it on!

Is Homosexuality A Disease Or A Choice?

Up until the 70s the answer was simple. Homosexuality was a mental illness. But with the rise in the gay community, the protests started and the pressure went full blast, forcing the American Psychiatric Association (APA) to cave and remove it from the list of mental illnesses. Guess how?

No, not by medical research or any scientific breakthrough….

Only 55% of the APA members approved of the decision in one meeting, and all these people dubbed as ‘ill’ were cured overnight with a vote! That’s it.  Impressive, huh?

Fine, so homosexuality is not a disease. Perhaps it’s a lifestyle or a choice. But what baffles the world is why would men consciously choose to be gay and suffer years of abuse, shame, discrimination, and in some countries imprisonment and death? Why would they choose a life style crammed with extremely high health risks of AIDS, chlamydia, E. coli infections, gonorrhea, hepatitis A, B and C, herpes, syphilis, and tuberculosis. (To name a few!) Let alone the emotional disasters of the homosexual world, and the statistics showing higher rates of substance abuse, depression, early death, suicide and domestic violence. Who would be excited to be part of that? It just doesn’t make sense! And if it were a legitimate natural choice, why do all religions categorize it as a grave sin? (Oops, no mention of faith is allowed. Sorry, scratch that part)

Fine, so it’s not a disorder or a choice. Hmmmm maybe it’s genetic! ‘Gays’ were born that way. I will resist the temptation of drawing a vivid image of a toddler ‘coming out of the closet’, because in our minds the rest of this scenario is only a game of hide and seek, nothing more! There are no gay children! Sexual tendencies crystalize at the age of puberty. But for the sake of objectiveness, let’s assume there’s a ‘homosexual gene’ some males are just born with. To that effect, the only logical conclusion would be a vast decrease in the gay community since ummm hello? Gay men cannot procreate and therefore they would become extinct coz no one is inheriting that ‘gene’. Actually, the opposite is happening, and the homosexual community is growing by the day. How do we explain that? Unless it’s a random deficiency in the X chromosome, in which case, scientific research would be able to back it up with some evidence to prove it is a ‘normal’ physical aspect. But for centuries now, no human being was able to justify this claim, and no one will, simply because there are many therapies to reverse the homosexual tendencies and they have proved to be extremely effective. If being gay was something we had no control over like race or height or fingerprints…. If it wasn’t an illness, then how come many men have been cured?

The only criteria that homosexuality fits in perfectly is ‘addiction’, for it must pertain some kind of great pleasure (hence all the fuss), it damages the body and spirit, and it’s difficult to quit. Much like alcohol and drugs. The tricky part is when gays put ‘feelings’ and ‘relationships’ in the equation to shut us all up, and we fall in the trap of ‘love wins’. Did I mention that documented testimonies prove more than 90% of gay men cheat on their partners?

Live And Let Live! Why Is Homosexuality A Problem For Us?

Many have given in to the hoax of ‘equal rights’ and ‘personal preferences’ of homosexuals, arguing there’s no harm in letting them be. But people, this isn’t a choice between flavors of chocolate or butter pecans! Gender is becoming obsolete and it’s a disaster affecting our societies as a whole. I think we have reached a point where homosexuality has become a problem for homosexuals themselves, but no one is advertising that part! Listen to this:

“HIV is a Gay Disease. Own It. End It” Lorri Jean, CEO of LA based Gay and Lesbian center.

“We put on such a respectable image, but inside we were miserable and ashamed. Like many young gays, I tried to commit suicide coz I didn’t think there was a way out…” Richard Jonah, former homosexual.

“Homosexuals molest children at at least 10 times the rate of heterosexuals” Journal of Sex Research.

They can fight it till they’re blue in the face, but homosexuality always was and always will be an addictive psychological disorder brought on by a trauma. Many of today’s ‘gays’ have been sexually abused during childhood, neglected by their parents, have had self-esteem problems and were unable to fit in socially, or have missed having an authority figure in their lives. The solution is not to justify the acts, but to control the feelings that cause them and help them heal, the same way we reach out to drug addicts and alcoholics. We shouldn’t judge them, but like hell we definitely won’t celebrate them either!

When did life become so ironic that sinners are viewed as brave fighters for freedom and the faithful have become hateful and ignorant? (Yes I’m bringing religion into this now, deal with it!)

Do you know why Islam is the ultimate proof that ‘love wins’? It’s because it’s constant, and doesn’t wash away under pressure. Islam, Christianity and Judaism all put rules to keep us safe and healthy, the same way we discipline our children to protect them from trouble. Islam is against homosexuality because it wants what’s best for humanity; productive families, emotionally healthy children and protection from being driven by abnormal and dangerous desires. Two daddies and an adopted child does not a family make! We don’t hate gay men; we just hate seeing them destroy themselves and others… We are open-minded enough to believe they can heal and be healthy and happy…

Isn’t this how love truly wins…?