At the end of 5 century and the beginning of 6 century Allah blessed the Ummah with Sheikh Abdul Qadir Jeelani. He is known by many names among us today. Some names befit his stature but some are plain wrong which contradict the Uluhiyyah of Allah like Gauth-e-Adham and Mukhtar-e-Gul. This was a man who has left his mark on many of the Sciences of Islam.

At the end of 5 century and the beginning of 6 century Allah blessed the Ummah with Sheikh Abdul Qadir Jeelani. He is known by many names among us today. Some names befit his stature but some are plain wrong which contradict the Uluhiyyah of Allah like Gauth-e-Adham and Mukhtar-e-Gul. This was a man who has left his mark on many of the Sciences of Islam.

Imam as-Sam‘aani said of him: ‘Abdul-Qaadir was one of the people of Jilan, the imam and sheikh of the Hanbalis of his time, a scholar, righteous, religiously committed, charitable; he remembered Allah a great deal (dhikr), was always deep in thought and was quick to weep. [Siyar A ‘laam an-Nubala’, 20/441]

Born around 29 Shaban 470 AH (1077), he was a resident of a place called Jilan/Geelan. Its also said to be the area of Tabrez. This is located at the border of Russia and a large portion of it lying in Iran. Jilani in Arabic, Geelani being the actual name and Keelani for those who couldn’t read the G of Geelani. (عبدالقادر گیلانی)

There Sheikh would go on to study Hadith from the author of the renowned Musnad Siraj of Abu Muhammad Jafar Ibn Hussain and since Hanbali fiqh was flourishing therein, he studied fiqh from giants like Abu Saad al-Mukkharrami and Abul Wafa Ibn Aqeel etc. He studied Adab and the Sciences of Sarf and Nahw under the giant al-Khateeb al-Tabrezi. He studied the Sciences of Sufism from Abu’l-Khair Hammad ibn Muslim al-Dabbas.

Sheikh Abdul Qadir’s students would go on to include luminaries like the author of al-Mughni, Imam Ibn Quddamah al-Maqdisi. Sheikh sought knowledge in Baghdad for nearly 30-35 years. He struggled and dedicated his life to the study of the Deen. Sheikh Abdul Qadir was one of the leading Sufi sheikhs during their early stages, when their concepts were moderate and closer to the Sunnah, and in most cases were based on the Qur’an and Sunnah, with a particular focus on deeds of the heart (spirituality).

We find a parting advice Sheikh Abdul Qadir Geelani gave to his student, “If you want to gain and benefit from knowledge then you must:

1. Learn how to carry heavy loads like the camel. (Take whatever you’re given and bear what you have to bear for the sake of gaining knowledge.)

2. Learn to have the greed (to learn) like the pig. (You wouldn’t see a pig care about anything but put its head down and keep searching for dirt once set free.)

3. Learn to be a sycophant like the dog. (A dog for the sake of just a small bite of food would bear the beating of its Master and keep coming back to him no matter what.)

Sheikh himself narrates how in his quest for knowledge he was forced to eat from thorny plants and the leaves of the vegetable sellers that would fall down into the river. This has been recorded on the authority of Imam ad-Dahabi in Siyar Alam al-Nubula and Imam Rajab al-Hanbali in Tabaqat Hanabila. Sheikh Abdul Qadir narrates how he left his place one day extremely hungry and he hears a voice that says, “Take a loan and I will fulfil it for you”. Sheikh says he couldn’t find the source of this voice. He goes to a shop and asks the shopkeeper to give him some stuff but on the condition that Sheikh would give the man something in return for the stuff when he got something and if he dies then the man is to forgive him. These words brought tears into the eyes of the shopkeeper and seeing a suffering student of knowledge he told him not to worry and take whatever he needed. Likewise Sheikh kept taking his necessities from this shop for over a year. Sheikh Abdul Qadir kept feeling bad for this situation. He gets a dream where he is told to go to this open space and take whatever he finds there. On going there he finds a piece of gold which he returns to the shopkeeper and settles his debts.

Seeing this treatment, the other students of Hammad also started making fun of teasing Sheikh Abdul Qadir. Once when Hammad saw this happening he shouted to the students, “O Dogs! Don’t trouble this boy for he is the best of you. I tease him only to test his ability to bear and his confidence. Verily he is proving to be a mountain of patience.”

This has been noted to be the way of many Sufis. It is not from the Sunnah to use such derogatory terms when speaking to people or to tease a student as such when he has come to seek knowledge. Nowadays many people have many misconceptions regarding the esteemed Sheikh. Those who wish to embark on spreading the message and working for the sake of Islam should read al-Fath ar-Rabbani by Sheikh Abdul Qadir Jilani.

Sheikh Abdul Qadir decides to remain in Baghdad and his teacher Abu Saad al-Mukharrimi had a small school which the Sheikh took as his place to teach. He used to teach the Sciences of Fiqh, Hadith, Aqeedah and also matters pertaining to purification of the heart and soul. Allah gave such an acceptance among the people that it is said that 50,000 or so people used to attend his lectures. This is no doubt an exaggeration but shows the high numbers in which his classes used to be attended so much so that the school couldn’t contain the numbers.

Imam Ibn Rajab al-Hanbali narrates an incident of the love people had for the Sheikh, where a woman drags her husband to the gathering of the Sheikh. She tells that she agreed to marry her husband for a mahr of 20 dinar. She has forgiven 10 Dinar but he is to work for the Sheikh for the other 10 Dinars. She hands over her contract to the Sheikh and asks him to give it back to the husband only when he has completed the work worth fo 10 Dinars. Sheikh kept the man to work and would pay him a day and off the other day. At the 5 day Sheikh calls the man and returns him the contract and says that he is free to leave. His wife had forgiven 10 Dinars and the Sheikh had forgiven for him another 5 Dinars.

The Karamat of Sheikh

A famous disciple of Sheikh Abdul Qadir, Umar Suhrawardi wanted to learn Ilm al-Kalam. He decided to discuss this with Sheikh Abdul Qadir first. In the gathering Sheikh spoke about Kalam and said how it was not a part of the Aqeedah of the Salaf whom they followed and would look at Umar while saying this. Umar thought this was a mere coincidene till when Sheikh took his name and said that he was actually referring to him and that there was no benefit in learning the Ilm of Kalam. This was a miracle that Allah blessed Sheikh to know what was in the heart of his student Umar.

Imam Ibn Katheer said: He had a dignified bearing, and he kept quiet except for enjoining what is good and forbidding what is evil; he had very little interest in worldly gain (i.e., he was an ascetic); miracles were attributed to him; his followers and companions spoke a great deal about him and narrated from him his words, actions and miracles, but most of the reports about his miracles are exaggerated. He was righteous and pious, and wrote books called al-Ghunyah and Futooh al-Ghayb, in which there are good things and in which he also quoted da‘eef (weak) and mawdoo‘ (fabricated) hadeeths. To sum up, he was one of the leading sheikhs. [Al-Bidaayah wa’n-Nihaayah, 12/768

His followers have raised him to a level which does not befit him, comparing him to the station of Allah and greater than the station of the Prophets. This is absolutely wrong. We accept him as an esteemed giant scholar of Islam and a major faqih of the Hanbali madhab. Allah blessed Sheikh Abdul Qadir Geelani with the Aqeedah and teachings of Ahlus Sunnah. Sheikh writes that we believe in the names and attributes of Allah as they have appeared in the Quran and the Sunnah without trying to interpret them. There is nothing similar to Allah in His creation.

Sheikh Abdul Qadir writes in al-Fath ar-Rabbani – O Boy! You aren’t on the right path unless you follow the path of Islam, the foundation for which is the Shahada. O Boy! You may say the shahada with your tongue but you still won’t believe for there are many idols placed within your heart. These idols could be the ruler you are afraid of or the village headman who scares you. To be overconfident or have complete faith only in your earnings, your profits, your strength, your hearing and seeing, your hold are also idols in the heart. To think that a creation can harm or benefit, take away or give are all idols in the heart.

In another place he writes – You are confident in your belief over your power, profits and your earnings. Anything that you hold at such a station is that which you worship. If you believe that if you don’t go to the paymaster then you won’t get your rizq then that paymaster is your idol.

In another place he writes – Recite the shahada and recite it with ikhlas. Keep Ikhlas at the forefront and with this Ikhlas subdue the devils. Tawheed is such a thing which burns the devils fom among the humans and the jinn. Tawheed is such a light that illuminates. Anything which you place your trust in other than Allah, then that is what you worship.

An old man comes to the Sheikh and in his heart is is thinking what good is reading all this Quran and Sunnah. Why not sit in a place and just take the name of Allah? The Sheikh tells him that if he indeed wants to sit in a place and just mention Allah then for that he needs to first learn the knowledge. If you don’t seek knowledge then you are like a bird who wants to fly but has no wings.

Sheikh Abdul Qadir narrates how once he went into the forest and was feeling extremely thirsty. A cloud covers him and water sweeter than honey falls from which he quenches his thirst. Thereafter a light comes in front of him and proclaims, “O Abdul Qadir! Your worship has been accepted and all that was Haram before has now become Halal for you. All your worries and troubles have been removed for you.” On hearing this the Sheikh seeks refuge from Allah and the light vanishes. Sheikh writes that this was a devil and the devil told him that he had saved himself because of his knowledge of the Deen and Fiqh otherwise the devil had been successful in deviating 70 Sufis in a similar manner. Sheikh Abdul Qadir Geelani told his students that no matter how big a man might get in terms of his stature and position, Allah will never make the Haram as Halal for them.

Based on the lecture by Sheikh Maqsood ul Hasan Faizi حفظه الله, delivered in Al-Ghat, Kingdom of Saudi Arabia. 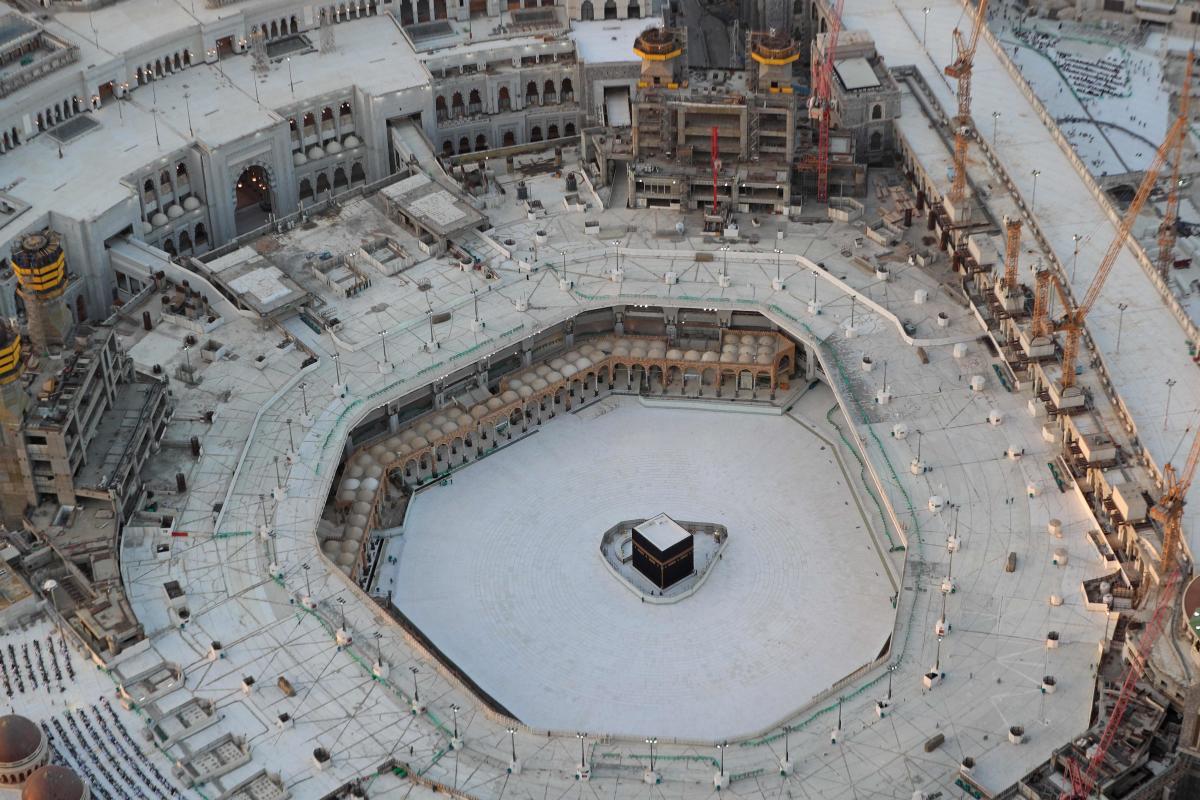