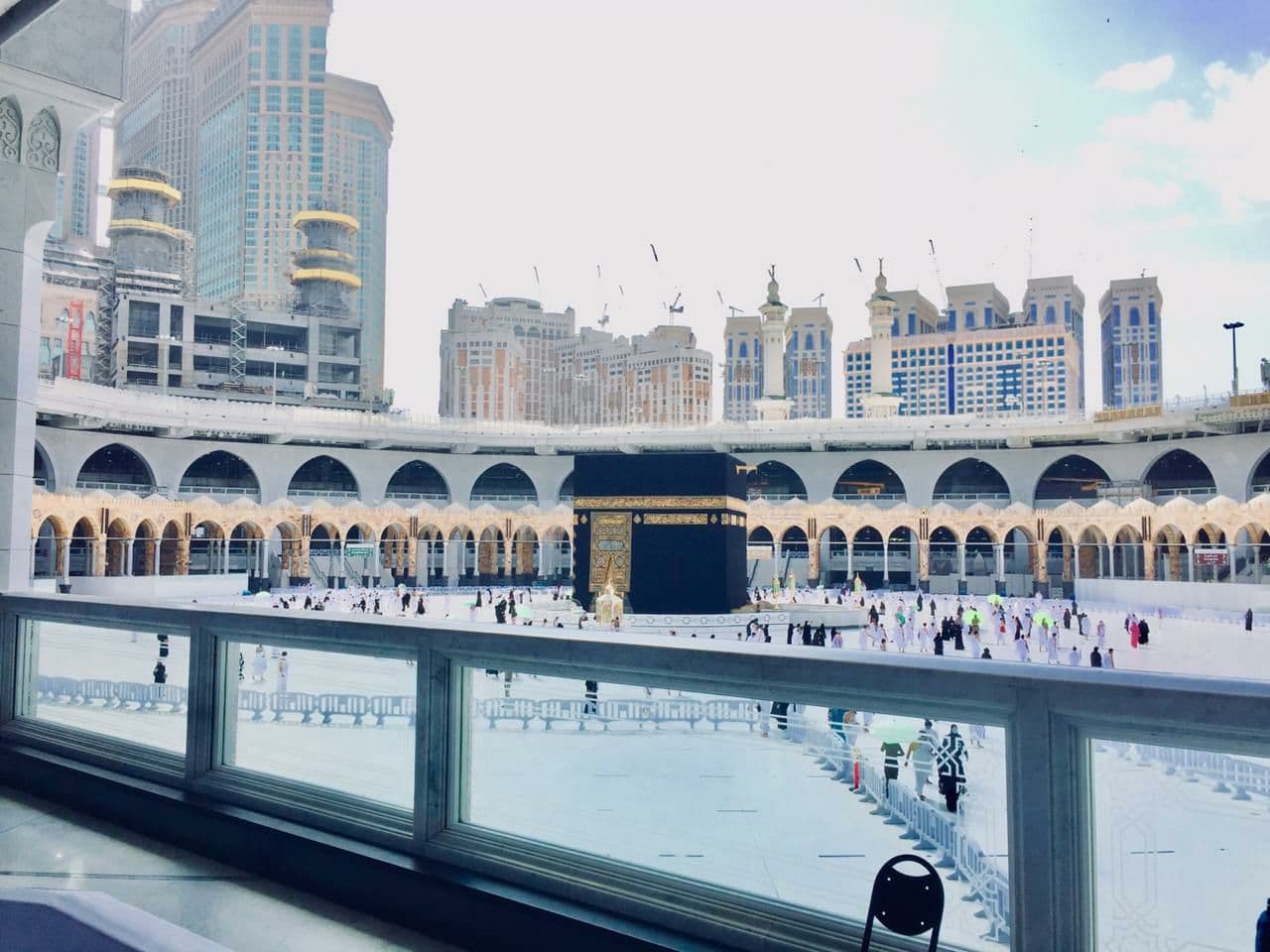 This is indeed a stark moment in history. One for the books, one for the memoirs and blogs. One to tell your future kids about if God forbid we don't get wiped out by a plague by then. Umrah is the voluntary pilgrimage that Muslims all across the globe make, and due to the pandemic, this is currently only allowed for citizens of Saudi Arabia with a limited number of permits. The permits are being rolled out in phases and the first batch of international pilgrims was welcomed last month.
Guest Author

Here is an on the ground narrative of navigating to the House of Allah for Umrah amidst a raging pandemic. Over to more from the ground:

This is indeed a stark moment in history. One for the books, one for the memoirs and blogs. One to tell your future kids about if God forbid we don't get wiped out by a plague by then. Umrah is the voluntary pilgrimage that Muslims all across the globe make, and due to the pandemic, this is currently only allowed for citizens of Saudi Arabia with a limited number of permits. The permits are being rolled out in phases and the first batch of international pilgrims was welcomed last month.

The technical process of booking a permit for Umrah itself would require some divine intervention. The app 'Eatmarna' requires you to connect all dependents to their sponsor, and each one needs to have a verified Tawakalna account. By which time if your sponsor such as in my case was my father doesn't loose his patience due to the complexity of it, you can then proceed to book slots for your permit. Now, booking for one might be a tad bit easier than booking for 4 people on a single day. Like all desperate citizens, you would need to look for available slots every day diligently, not get disheartened by the plain black dates while waiting for the bold ones to appear. Occasionally, on a random night, a date will appear which will be bang in the middle of a workweek or in two days allowing you no time to book a means of transport to and from from the cities. And like an elusive desire under a vanishing spell, this time slot also disappears as quickly as they appear. A stubborn seeker that I am, I kept going at it for a month, all the while praying for a merciful door to open up for me and my family.

On a busy workday, as I was munching through my lunch, the dates show up in bold for an entire week, obviously not on a Friday.  I do a quick microsecond weighing of which date would be best suited, decide on a tentative Saturday in the second week of December, and excitedly press the 'Book Permit" option. This allowed us a week to prepare and I waited to see if my family can make way through their schedules. I handed the reigns of making this happen to the Almighty, not being sure if I could make it, just calmly accepting that if it does or does not happen, it will both be from Him.

Two days before we leave, my father discusses the possibility of taking the buses to travel since driving that long a distance with the time constraint would be inconvenient. His work gives the green signal to travel, I get my day off, my sister lays off an ER rotation, and my mother is clear due to it being a weekend. If you can take flights to Makkah, it makes the whole journey quicker, but we couldn't so buses were our means of transport. On that warm Friday afternoon, we lunched and boarded the buses - ready to travel. The journey to Makkah was the smoothest, cleanest (!), made hygienic stops, and overall a relaxed one. A quick pitstop at McD for dinner and we were back on the road heading to Miqat.

At 2 am, on a silent dark morning only lit by the kiosks, we arrive at Miqat. So unlike the usual hustle-bustle of kids and women putting on their Ihram. The first reminder that this Umrah was unlike the others we had experienced. Within an hour we were ready with our Ihram, a break for hot tea and cookies later, we were heading to the Haram with the takbeer wetting our lips.

We arrive at our hotel at 4 am, and even though it's pretty early in the morning, the stark absence of people milling about at all times like it is usually in Makkah, the hundreds of shops all boarded up, not a single restaurant open around us, and the ghost town that had replaced this evergreen city was the second reminder that this was a pandemic we were dealing with. We made our way to the mosque on foot, the minarets being under construction, only the watchtower marking us coming closer to the Haram. Once we reached the courtyard, we had to show them the permit for Fajr prayer and we were redirected to a longer route. We walked past all the lavish hotels that always had the old and young coming through their golden turning doors, now bare with only lights marking their functioning. After walking a few km we arrive at the tent in the courtyard of Haram, where infrared cameras checked our temperatures, and barcode scanners beeped our entry to the praying area.

The pathway for those with prayer permits is separate from those with the Umrah permit. They don't cross -meaning you can't do one along with the other if you do not have separate permits. We were then directed to the second floor where the open area above the balcony was boarded with white flat boards, so we were all deprived of our first view of the Kabah. We then sat down to pray at a distance of 6 feet from each other, everyone solemnly absorbing this new atmosphere and wiping away tears of gratitude. I was warned to put on my mask once I had finished crying with sniffles, and I managed a weary smile at the volunteer. There is no incumbent crowding at the ZamZam containers to drink water, instead, the volunteers (May Allah reward them) walked around handing water to whosoever needed it. In other parts of the Haram, men carried containers of ZamZam on their backs handing water out in disposable glasses to avoid contamination.

As the muezzin called out the Fajr adhan, his beautiful voice reverberating through the speakers above, we all had collective goosebumps, we were here and Allah had chosen us. Post our Fajr prayer, we walked back to the tent wondering if we could perform Umrah now, as our time slot was for 10 am but it was only 6 am by then. A merciful guard quickly beeped our four permits and allowed us to proceed for Umrah. Elated with already tired feet, we took the path towards the Kabah. A single file of people entered the gates, being handed disposable packets to carry our footwear in, and soon enough we were standing in front of the Kabah, a relatively empty Tawaf area, choking with emotions at being there.

Our Tawaf began by walking on colored taped strips in concentric circles around the Kabah, each of these circles was at a precise distance from the inner one. The innermost circle was reserved for old women and men who walked slowly, the second circle for the ones who need mobility assistance on wheelchairs, the rest for women and men. There were men guarding each of the spaces in between ensuring if any spot got too crowded, to quickly shift pilgrims to the adjacent circles and keep the middle areas empty. We circumambulated 7 times around the Kabah, the cold floor waking all our senses and the unusual hush of the Tawaf making the birds flying overhead loud in worship.

When we had finished we tore our teary eyes away from the magnificent sight of the Kabah and imagined what Allah's Arsh above this in the heavens above must be like. We then exited taking the path that led to the Saa'ee area. To pray the sunnah prayer a separate area was made, away from the Tawaf area. Nobody was allowed to loiter post the Tawaf was done and were quickly ushered away by the volunteers. Once you leave this area, you cannot help but feel sad about not being able to consume the view of the Kabah longer, as greedily as we could before these stringent pandemic guidelines came into play.

At the Masa'a area, there is less rushing, and everyone sticks to their prayers within the lanes, and once done we were allowed to leave from only two gates of exit. We can no longer go back from the path we entered from, and we exit out in the open courtyards of the complex. The area is empty save the cleaners, and security, a lone family in the distance, and the sun has come up biting into the chill that was hanging in the air. We tiredly trudged back to our hotel feeling content, hungry, and confused that the shops had still not woken up at 9 am in the morning. Only to discover later that, this is the new normal. Not until the pandemic subsides, will these shops be allowed to open, and neither can you quickly access that sandwich and juice that is a staple of anyone who heads to and back from the Haram.

By noon on the same day, we were back on the bus ready to embark on the journey back home. This journey unlike the previous one was rough, exhausting, made unhygienic stops, and made us all wish home came sooner. 10 hours later we were home, hysterically cracking jokes because we were exhausted, in need of anything that could straighten our banana-shaped bodies, and before long we all passed out.

While people all across the world yearn to be here at Haram at a time like this, I cannot help but feel immensely blessed that we were chosen with His mercy, and I will always be grateful for that. Alhamdulillah. I also takeaway from this trip the wisdom that Allah answers prayers when the time is right. I prayed desperately to be there in Makkah on the 11th of one month, and when that didn't happen, He made it happen on the 11th of the following month! If that isn’t His Rehma I don’t know what is. Allah’s mercy - its infinite and always in my favor.

- This is a guest submission by Dr Reema Ayesha - Professionally a dentist and passionately a writer. Growing through real life experiences and working on staying steadfast on the path of Islam. Opinions oscillate between being a woman in her 20’s and a nostalgic 90’s kid. Discover more of her work on reversefocus.wordpress.com.