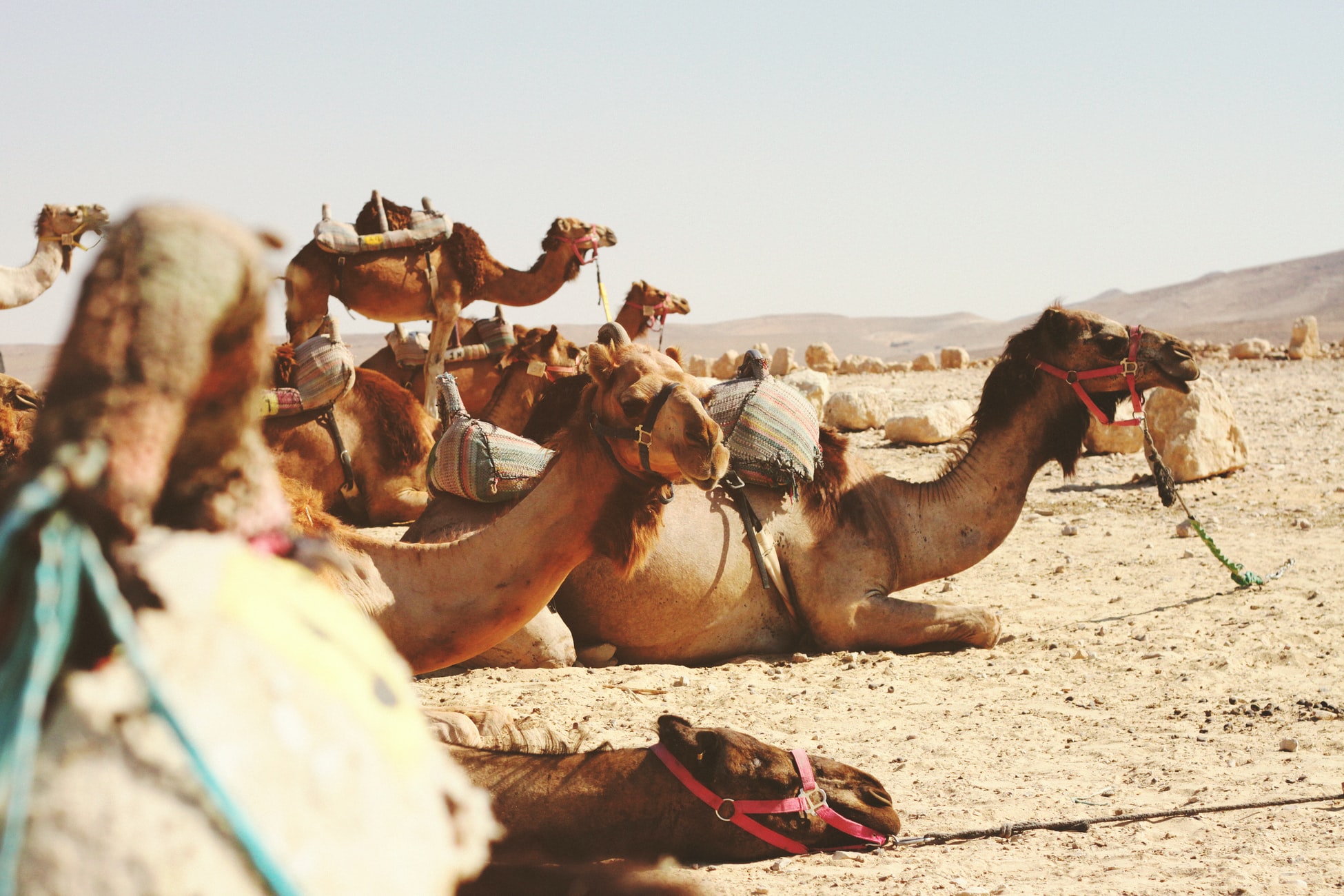 Allah, the Most High talks about camels in many places in the Quran and the Sunnah mentions camels abundantly as well. It was the most relevant domestic animal to the Arabs of that time. Allah calls us to take lessons from the creation of the camel. What are they?

Allah, the Most High talks about camels in many places in the Quran and the Sunnah mentions camels abundantly as well. It was the most relevant domestic animal to the Arabs of that time. Allah calls us to take lessons from the creation of the camel, it is talked about in the Sunnah to the similitude of great rewards and to encourage good deeds. The camel is indeed an amazing Creation of Allah.

The analogy of the camel has also been used in relation to the Quran in authentic Ahadith:

Abdullah ibn Umar reported: The Messenger of Allah صلى الله عليه وسلم said, “Verily, the parable of the companion of the Quran is that of a tied camel. If he is committed to it, he will keep it. If he releases it, he will lose it.” [Agreed Upon]

Al-Hafidh Ibn Hajar said in his commentary of this hadeeth: “So long as one constantly reviews it, what one has memorized will remain, as is the case with a camel, if it remains tied, you will keep it. [al-Fath (9/79)]

The camel was singled out here because it is the most likely of domesticated animals to run away, and if it does run away, recapturing it is very difficult.

SubhanAllah! There is so much wisdom even in wordings of the analogies of Rasoolullah صلى الله عليه وسلم. As Allah says about him:

Your companion [Muhammad] has not strayed, nor has he erred, Nor does he speak from [his own] inclination, It is not but a revelation revealed. [Surah An-Najm, 2-4]

Those who are on their journey of memorizing the Quran surely know how easy it is to forget what hasn’t been constantly reviewed. The Quran is easy to memorize no doubt as Allah promised that He has made it easy. Yet, it is a prized possession and will only stay on if we are heedful and dedicated to it.

Have you noticed how songs you once knew long ago would come back easily to you even if you have stopped listening to music long ago? The Quran, on the other hand if neglected can almost disappear. Many people testify that it is almost like re-memorization and sometimes even harder than new memorization. This is no surprise as Rasoolullah صلي الله عليه وسلم swore that this is true.

Narrated Abu Musa: The Prophet (ﷺ) said, "Keep on reciting the Qur'an, for, by Him in Whose Hand my life is, Quran runs away (is forgotten) faster than camels that are released from their tying ropes."

The word “تعا هدوا” is loosely translated here as keep on reciting the Quran, but what it actually means is keep your covenant with the Quran. When we commit to the Quran we are on a covenant and unless we do our part, we can expect the Quran to go away from us. And retrieving it, like retrieving camels may take a lot of effort, pain and difficulty.

Yes, read that again. (I am talking to myself first.) Forgetting didn’t happen by coincidence. You have been made to forget. Made to forget. لا حول ولا قوة الابالله . May Allah rectify our affairs and allow us to hold firmly to His Book.

We often hear that children memorize the Quran very easily at a very tender age, without too much effort. While that is true, what we do not hear often is how easily they forget too if not revised regularly. They would remember rhymes learnt in nursery even at high school, but the same cannot be said of the Quran. It cannot be taken for granted.

There is immense wisdom behind this SubhanAllah. Carrying the words of our Lord is a mighty task and if done sincerely has an enormous reward. It may be that it is a test of people’s hearts, to show the difference between the one whose heart is attached to the Quran and regularly recites it, and the one whose heart is attached to it only whilst memorizing it, then he loses interest, and forgets it. If one were to remember it easily, we wouldn’t have to make it our companion and constantly recite it.

This puts a lot of people off memorizing the Quran. You would hear people say things like:

“I would love to memorize the Quran but I fear that I may forget it, so I haven’t done so”.

This is from the whispers of Shaitan. If you were offered an amazing promotion at work with additional responsibilities yet a fabulous, unbelievable package would you shy away from it? Then why do we shy away from trying to get closer to our Lord?

And while the work requires dedication and effort, we also need to remember that Allah does not burden us more than we can bear. He knows our responsibilities, how busy we are and how difficult it gets. He Knows. He also Knows the free time we have in between and how we prefer to spend on our phones or aimlessly browsing taking “breaks’’ where we can dedicate to Him. If we strive for Him, He WILL cause it to happen, He WILL make it easy as He has Promised us:

And those who strive for Us - We will surely guide them to Our ways. And indeed, Allah is with the doers of good. [Surah al-Ankabut, 69]

May Allah, the Most High make us of those who strive to do good and not be of those who Allah says always give excuses, like the Bedouins who complained to the Prophet:

Those who remained behind of the Bedouins will say to you,

"Our properties and our families occupied us, so ask forgiveness for us." [Surah al-Fath, 11]

May Allah سبحانه وتعالى   make our properties and our families a means to get closer to Him and a source of blessing to us. Aameen